This was another short project that involved fixing an issue. A client was having a problem with the menu being displayed properly. So, every time a visitor would hover over the menu item, the drop down menu would be misaligned by displaying somewhere to the left side of it. 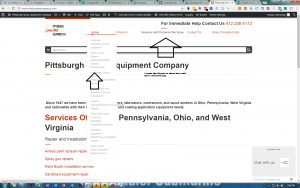 In most cases it was a CSS issue, and there have been some cases where JavaScript has made the modifications, but luckily this one was a simple CSS modification.

However, this is where things get relatively interesting. The CSS modifications were made but the website was not updating. The modifications were confirmed to work on my Localhost, so there was something else that was the problem. This was due to the website’s CDN not being updated yet, which is typical with CDNs, and often has a Developer Mode to turn in in situations you do need to see live changes.

During this process the client was very cooperative with the way I guided him through the steps.  I of course could have asked for the credentials for the CDA, but I try to preserve the least amount of credential contact. This is mainly for professional reasons and builds trust with a client, or at the very least avoids any distrusts a client may have.

Do NOT follow this link or you will be banned from the site!